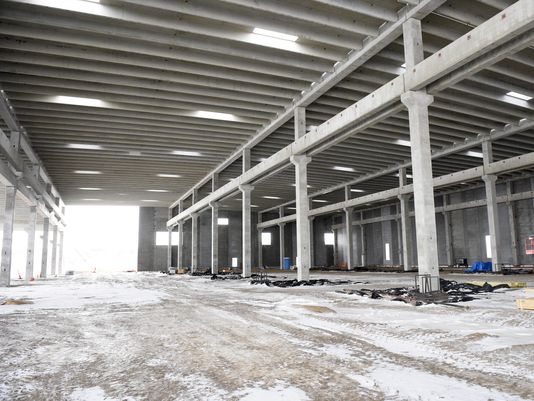 Last year was a record year for Sioux Falls construction. Here’s why.

A new manufacturing facility for precast concrete panel producer Gage Brothers, sits partially constructed north of Sioux Falls. The new plant through increased use of automatization will allow the company to increase production by 60%.

Wind whipped through the wintery construction site as Tom Kelley, from the safe warmth of his pickup, thrust forward with his hands, explaining the network of bins, bays and tracks that will make his precast concrete company run like a well-oiled machine.

Kelley’s vision, detailed down to the 250 skylights that will eventually dot the roof, is enough to paint a grand vision over what in reality is still a shell.

It’s a big shell – a gray monolith in a part of Sioux Falls that still has gravel roads and sweeping hills and few rooftops.

Valued at $40 million, this is a big project. It changes things. Not just for Gage Brothers, but for a city that just celebrated another record-breaking year of construction.

“We needed to up our game and remain relevant,” said Kelley, Gage’s president since 2001. “Our city’s at that transition where we’re going to be more of an Omaha or a Des Moines or a Lincoln.”

Combined value of construction in Sioux Falls climbed higher than ever before last year, reaching $739 million, according to 2017 building permits.

It’s the fifth record-breaking year in a row during what has undoubtedly been a boon period defined by gargantuan commercial projects, which have popped up across Sioux Falls with support and sometimes direct involvement from City Hall.

In fact, for all the valuation gained last year, the number of permits filed with City Hall last year actually dipped to a seven-year low.

Hail storms in 2014 led to a flurry of reshingling permits that year and in the two years that followed, and that accounts for some of the decrease, City Planning Director Mike Cooper said.

But the 6,755 permits filed in 2017 is still low.  It’s nearly 100 fewer permits than City Hall was handling before the storms – before projects started to ramp up in value in 2012.

Some of that shift goes back to support from the South Dakota governor’s office and from the city, said Kelley, who also serves on the board of the Sioux Falls Development Foundation.

“That’s how things are going to get done,” Kelley said.

The development group received support from the state and city for its industrial park in northwestern Sioux Falls. In 2017, the foundation celebrated the commitment of the park’s first anchor tenant.

The Win Chill building at Foundation Park, a refrigerated food warehouse, was a banner project last year. In fact, it was the city’s biggest, with work valued at $32.9 million, according to 2017 permits.

Gil Haugan Construction, the contractor, is also working on a number of sizable projects across town, including construction of the Lewis Drug and PAve patio at 136 S. Phillips Ave., the downtown site where the Copper Lounge once stood.

“We’ve seen steady growth over the last number of years in the commercial side of things,” Vice President Wes Engbers said. “We’ve been very fortunate, I guess, to get our fair share of the work.”

Construction continues on Huntington Village Apartments. The project by First Dakota Enterprises was one of the biggest of 2017.

Rebuilding on the old Copper Lounge site came with a hefty valuation for City Hall’s building permit records, but the $1.8 million worth of work permitted so far isn’t enough to make it one of the top five or even top 10 contributors.

After Win Chill, the highest-valued commercial projects in 2017 were:

Avera’s new campus was a byproduct of necessity.

The hospital system’s steady growth in patients creates a need for space and employees, said David Flicek, president and CEO of Avera McKennan. In fact, before executives agreed to build the new hospital at the intersection of 69th Street and Louise Avenue, they considered a site closer to their existing campus near the city’s core.

“You always like to keep services close together,” Flicek said.

The first tenant at Foundation Park in northern Sioux Falls will be a refrigerated warehouse.

But the project would have demanded a $30 million parking ramp. Instead, Avera leadership decided that money should go to health care. Not parking.

The entire Avera system adds patients at a yearly rate of about 5 percent. In Sioux Falls, much of that growth comes from an aging population that moves closer to the city as their care needs increase.

Healthcare demand and the generosity of philanthropists have led both Avera and Sanford Health to add buildings and contribute to Sioux Falls’ busy construction industry.

The growth has also added to an already strong jobs market, which experts say is another reason why there has been so much commercial development in recent years.

The new Gage Brothers campus will allow the precast concrete company to add automation, create a better working environment, attract more workers and, eventually, grow by as much as 60 percent of its business, which already caters to projects in Minneapolis, Denver and Chicago.

“There were more automated ways, better ways to do what we were doing,” Kelley said.

Low unemployment and a growing metro area population, which surpassed the quarter-million mark in 2016, generate interest from outside businesses looking to relocate. The increasing numbers of families and households that come to Sioux Falls for jobs then prompt local businesses to branch outward.

With help of taxpayer dollars and support from state and city government, the Sioux Falls Development Foundation took steps to create more opportunities for local businesses and catch the attention of non-South Dakota companies looking for a new place to grow.

In recent years, the foundation worked to market Sioux Falls as a bountiful metro for businesses hoping to relocate or expand. Foundation leaders brought in national “site selector” firms, hoping to impress upon them the potential of growth, said Dean Dziedzic, interim president of the Development Foundation.

The city of Sioux Falls plays a direct role in supporting the foundation’s efforts by helping to finance the group. City Hall also helped annex the property while the state kicked millions to help buy the land.

But City Hall does more than cheer from the sidelines. It participates.

The city’s contribution to the skyrocketing construction totals logged by its planning department each year started with an early spark from the 2012 permits pulled for the Denny Sanford Premier Center.

It continued with a $24 million indoor pool, which opened in 2016 as the Midco Aquatic Center. Last year, City Hall was one of the biggest investors in the record-breaking construction frenzy, building a $16 million hotel and restaurant at Elmwood Golf Courseand the $25 million city administration building.

The four-story Avera project, which will include both a hospital and clinic, in southwestern Sioux Falls was already one of the biggest contributors to last year’s valuation total, but the work is hardly finished.

Avera is currently planning about $174 million worth of construction in Sioux Falls, including some additional construction on its main campus, Flicek said.

“You’ve got to just continue to keep up on the growth of the population,” Flicek said.

Gage is also planning an office building at its new campus and has yet to pull building permits for the project. And the city will continue its contribution to Sioux Falls’ building growth, with massive downtown projects such as a mixed-use parking ramp and a sizable joint project with Lloyd Cos. that will bring more multi-family housing to Sioux Falls’ growing uptown neighborhood.

“The city has been very pro-active in looking for opportunity in the downtown area,” Cooper said. “That’s going to continue.”

Nielson is focusing now on offering price point housing in the Madison community. He purchased land east of Division Avenue and north of N.E. 9th Street and plans to create the Cyber Estates, a new...
Read more
July 5, 2019

The Results are in! Check out the BEST in town!

SiouxFalls.Businesss with Jodi Schwan is a locally owned digital news organization serving the Sioux Falls, S.D., business community. Jodi is a public speaker and a veteran of Sioux Falls print and broadcast media. She has...
Read more
January 29, 2019

Tea ranked as second best place to live in SD

The Tea Weekly newspaper recently celebrated the fact that their little town was ranked as the second best place to live in South Dakota. The article written by Caitlyn French said that, “HomeSnacks.net ranked Tea...
Read more

Send this to a friend